What you need to know:  In terms of infection, these three attachments are worth reading  Whooping cough was once called Haemophilus Pertussis, as per the Harrison 7th edition, and is now called Bordetella Pertussis:

In terms of management of the infection, this thread is where you can glean the most practical information.

Close-Up on whooping cough, part One.

Close Up's programme on whooping cough, was a triumph of emotional blackmail using a cute baby with whooping cough, to push a policy which doesn't work.  But worse than that, was the standard of discussion on Close up's facebook page.  You know that eminence based manipulation has truly scraped the bottom of the barrel when Grant Jacobs obliquely counsels all readers not to even look at the scientific links put up, .... inferring that those who don’t have the right background won’t understand the studies posted implying that there is no need for anyone else to look at them either
Continue Reading

Jabbem all they say.....   What next? Forced contraception?

Perhaps. Have the public have lost sight of the "real" issues with regarding "choice"?

We were told that the public supports "free contraception for beneficiaries" .

But what does the public mean when they voted "yes" on the polls?.

Oh Hilary, don't be silly, that's a step too far.

Really? It's called "boiling frogs" and goes like this:
Continue Reading

The dangers of catscans and X-rays.

This is called "vaccine education" Australian Government style, from a book supplied throughout schools: 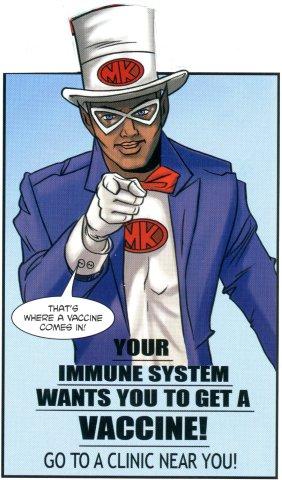 Clearly, school children are now considered so dumb that no facts are required. Why would the Australian Government be providing this cartoon book (which had the above picture in it) to all Australian school children? (I have only scanned half of it.) Of interest, this book does NOT appear on Medikidz website.  The whole book is an emotive, potted version based on garbled facts and a massive dose of peer group pressure. I wonder why "science' is no longer good enough? Perhaps if children knew the facts they might not want another vaccine?

In an attempt to improve the flagging rates of Gardasil uptake in USA, the Association of Women's Health in Washington DC, has sent this family divisive cartoon hither and yon, for doctors to give to girls as "information as well.  The tactics in 2012, are to key into peer group pressure at all times - appeal to girls whose peers think that parents don't know squat, and parents who follow like sheep, those who follow the Nike motto of "just do it". Note that not one FACT is involved in either parent's cartoon decision making...any surprises there?
Continue Reading

During a trip to the United States in 1993, a fall down a stairwell landed me in St Joseph’s hospital in Atlanta, where I was wheeled in to have an ankle X-ray. As part of the process I was covered with an incredibly heavy, 5 mm thick, lead “drape”. The “drape” was more a tent, because it extended down to the floor covering my head, and going down to the floor on three sides. During the five minutes or so it took the lead smocked staff to do the X-rays, I had to breath carefully, and be aware of heat rising.  The staff knew what I was going through, because the minute the X-rays were finished, the trolley was pushed out the doors into the cool corridor, and the lead covering whipped off double quick.  "Would a child cope with this?" I asked the staff. According to the radiologist...."Yes".

Fast forward to 1997, when Ian messed his ankle, and we landed up in Pukekohe X-ray. Was he covered with a lead sheet? No. What to do?. I looked around, and there hanging in the corner, covered in masses of dust (which escaped the cleaner's notice....) was a pathetic 2 mm thick, lead apron.
Continue Reading

Did you know that for decades, ultra intelligent people who went through medical school, truly believed that babies don't feel pain? This bolt from of the blue, hit us on November 24, 1981, with the birth of our first child. Paediatric "paragons of all truth", had done eleven (yes you read that right) needle insertions into the spine of our baby, while a nurse held him, face down, around her body, to stop him wriggling. Strangely enough (pardon the sarcasm) after screaming for quite some time, he went into shock.

When I arrived at the neonatal unit two hours afterwards, I didn't recognise his face. It was swollen and puffy. He was rigid, and had clamped his thumbs in his fists, and wouldn't respond to me for nearly three hours.  I felt like our baby had disappeared.. Why had they not called me? They thought I might get upset. What an understatement.

In attempting to discuss this situation with the head paediatrician, I was told that "newborns don't feel pain".

Try telling that to a first time mother who has just accidentally spiked her newborn with a nappy pin.
Continue Reading

Back to Basics, Part 1 and Part 2, lay the framework for asking the key questions of this blog, which relate to "Just how 'scientific' are vaccines, in principle, in practice, in fact and in application?" In order to understand the implications of that in babies, the lack of understanding about the neonatal immune system (and new discoveries which are very disturbing) - another three part blog series - has to be read:

How a baby fights infection and Develops Immunity

In a 2011 article called "The Bodyguard" The esteemed Stanford University tells us this (full pdf) :

“If a patient were to ask me, ‘How’s my immune system doing today?’ I would have no idea how to answer that, and I’m an immunologist. None of us can answer that. Right now we’re still doing the same tests I did when I was a medical student in the late 1960s,” he says.
Continue Reading

There is a fascinating video on medscape website which all parents should listen to, or read the transcript of. The article is titled: "Why Doctors Keep Doing Treatments That Don't Work".

...."You have talked rather generously about evidence-based medicine. Most of medicine isn't evidence-based. The overwhelming majority is more "eminence-based," to steal from my colleague to the right [Eric Topol]. We do things because we have always done them. That is going to be less tenable, and you will be put under more and more scrutiny about "Why is that? Why is this happening to me?" or "Why, doctor, are you doing that as opposed to this?" You peel back the level that says, "Well, actually, there isn't any evidence to support that. That was merely my historical preference as opposed to my data-driven wisdom and decision-making." That will put pressure on what we do and will ask us to answer some of the questions about dominant practices that are founded largely by history".
Continue Reading