A few days ago, I set my husband a task. To read Paul Offit’s book called, “Deadly Choices How the anti-vaccine movement threatens us all” By half way through he was unamused. Beguiled by his sighs of discontent, I decided to stop my current track of writing. and start reading. Naturally I started with the Prologue, where the first sentence read; “There’s a war going on out there – a quiet, deadly war.”

Journalistically, this is called “setting the scene” – grab people by the scruff of the neck, and tell them what the problem is. A deadly war. “Why is that?” you will ask. The prologue meanders for a few lines discussing the "goodies", and then pouncing on the "baddies" who threaten us all, ... in this deadly war. Line 16 contains the punchline: “Some (parents) aren’t giving any vaccines at all; since 1991, the percentage of unvaccinated children has more than doubled”.

1) I fell down a stairwell in Atlanta, in November 1993.  Inside an Atlanta hospital a large poster appealed greatly to me. A helpful soul nicked it for me.
2) I came back with a load of newspaper clippings about how bad the USA vaccination rate was, and... what Bill Clinton was going to do about it.

So here’s the poster, for anyone with a memory to go back that far. Remember this? 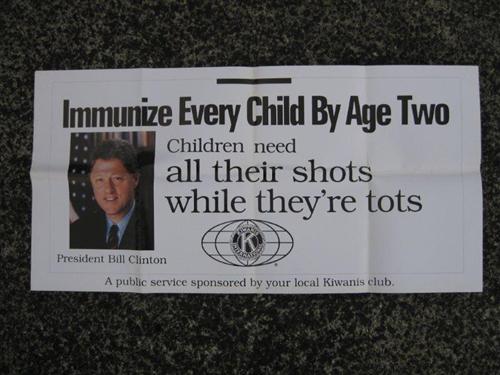 A group called “Kiwanis” International, whose public relations director was David L. Blackmer, set up 7,000 Kiwani clubs in the USA, with the slogan, “All Their Shots, While They’re Tots”.  So this is where Clinton lent his young smiley dial to the poster. The campaign included TV ads, bill-boards, and paper advertisements featuring the President with the message “In some urban neighbourhoods less than half the children under 2 years old are fully immunized against polio, diphtheria, measles, mumps, and several other vaccine preventable diseases.” During that year Kiwanis spent 17.6 million dollars on that campaign.

Paul Offit must have known the slogan, since he’s recycled it onto Amanda Peet’s doorstep as she’s now the spokesperson for the group founded in 1991, called “Every Child by two” and partners with Dr Offit on this website .

The history of the Clinton poster above goes back to 1991, the very year Paul Offit is talking about, so let’s look at a few facts from that year.

There was a measles “epidemic” in which nearly half of the deaths were in vaccinated children, according to one newspaper article. Though today, those children would be classified as “unvaccinated”. It was this measles epidemic which resulted in the recommendation to add a second MMR shot into the schedule, something New Zealand did in 1991 as well. But in those days, “one shot” was classified as “vaccinated”.

A publication called American Medical News, August 12, 1991, page 6, ran an item on a paediatrician survey conducted by the American Academy of Pediatrics. Academy President, Dr Antoinette Parisi Eaton was quoted as saying that the 10% of American children not vaccinated for measles, represented 8 million children at risk of contracting the disease. She was also upset at the 64% vaccination rate for Haemophilus, 84% for pertussis, and 86% for rubella. However, her figures were an over-estimate.

The Journal of American Medical Association set the tone for Governmental intervention on September 11, 1991, with an excoriating item in JAMA which starts out saying:

“What do Bolivia, Haiti and the United States have in common?

They have the worst immunization rates for children aged 2 years or younger in the Western Hemisphere.”

(So where does that leave Paul Offit’s claim that the numbers of unvaccinated has doubled since then?)

The article continues discussing the “National Immunization Campaign”. Quoting Dr Daniel Shea, the Academy of Pediatrics Vice President, saying that the society hoped to “find the resolve and the commitment” to protect the country’s children from these “deadly, crippling, vaccine preventable diseases”.

....Does that sound like every vaccine defender’s dream to use as a starting point to explain why things were so “good” then, and are turning to custard now?

Samual Katz and Walter Orenstein et al, (including perhaps, Dr Offit himself? ) trudged off to have a natter in Bill Clinton’s ear with the result that on 4th January 1993, the Clinton Administration announced a $1 billion-a-year programme, to immunize all of the nation’s children against a wide range of diseases, citing Public Health official estimates that, “only 37 to 56 Percent of the nation’s four million 2-year olds were fully vaccinated”. (Washington Post, 4/1/93; “Administration to Provide Free vaccines for Children” by Spencer Rich.)

On April 21, 1993, the New York Times weighed in with an article called “A Shot in the (wrong) arm” by P. Roy Gagelos, re-iterating that only 55% of children were fully vaccinated by 2 years of age, and that immunisation rates for the 11 states which provided free vaccines averages only 63%, compared with 58% for states without such programmes.

As if to reinforce how bad things were in 1991, JAMA continued to intone messages of woe in 1994  saying, “Since 1989, severe outbreaks of measles, pertussis, and other vaccine preventable diseases have made low immunization rates among preschool children a serious concern.” It also stated that MMWR 1994:43:556 – 559 stated that;

“only 72% of 2 year olds had completed the basic series of immunizations”.

If numbers of unvaccinated have doubled since 1991, why do some provaccine drones who echo every "Offit- mantra", now consider a study of vaccinated and never vaccinated children could never be done? they say.... there just aren’t high enough numbers now, for even a miniscule never-vaccinated control group:

In 2004, Smith et al published “Children who have received no vaccines: Who are they and where do they live?”. This was an extensive study of vaccination practices in the US, carried out from 1995 to 2001 on over 23,000 children selected at random to be representative of the larger population. Their results were interesting and bear directly on the desire to “put on a study” looking at the connection (or lack thereof) between vaccines and autism.

So which is it to be, Dr Offit?

Is a vaccinated/never vaccinated study impossible to do?

Has the percentage of unvaccinated children more than doubled since 1991?

If as all your mates contend, it’s impossible to do a vaccinated /never vaccinated study now, then the whole foundational premise of your “deadly war” book falls flat on its face.