Trust me, I’m the expert

“Good Morning New Zealand, News stories of the day from the 1930’s” is a Horton and Wilson/Moa publication (ISBN 1-86947-66-4) which we were looking through last week. Page 15 in the 1931 section, has an advertisement for Craven “A” cigarettes: 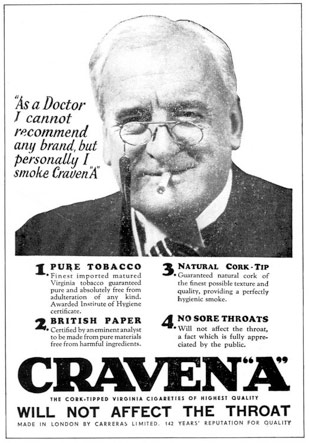 Doctors these days, don’t talk about the fact that there was a time when they actually prescribed cigarettes as a cure to asthma, emphysema and other respiratory conditions.

Our trusty doctor in the advertisement, starts out with the contradictory statement, “As a Doctor I cannot recommend any brand, but personally I smoke Craven “A”.  He goes on to regale us all as to the purity of this finest Virginian tobacco, guaranteed free from adulteration of any kind, and free from harmful ingredients.  It has a natural cork-tip, no less, to provide the perfectly hygienic smoke, and will not affect the throat.

Think for a moment, of all the years when the cigarette manufacturers and doctors knew full well that cigarettes were dangerous to your health, and they did absolutely nothing about it.  The advertisement prompted my husband to reminisce on his time as a teaching principal in the 1960’s when he would order from the National Film Library’ 16 mm films about smoking.  The children were shown in gruesome graphic detail, what cigarettes did to lungs.  Whether films over rode peer groups pressure is another story.

All through Good Morning New Zealand were advertisements about doctors promoting products of one kind or another.  The only product still on the market is cigarettes, though Craven “A” is nowhere to be seen.  Seventy years later, no doctor would be seen dead promoting cigarettes, and few would even know that doctors were a key lynch pin in getting a lot of people addicted in the first place.

I wonder how we will view vaccines, 70 years from today.  This morning, a doctor translated an article for me, which was sent out to a group e-mail list.  Sanofi’s Hexavalent, which has been wiithdrawn in Europe, supposedly because the Hepatitis B component had inadequate antibody formation.  This group doesn’t buy that explanation, since those details are sorted out way before Phase 1 trials let alone years after phase three trials.  They believe the reason for its withdrawal is something far more sinister.  They also believe that the substitute vaccine, GSK InfanrixHexa, (which has just been added into the New Zealand schedule) is just as bad:

“Nearly every day, infant bodies are transported to the medico-legal Institute of Munich for autopsies on the request of the Minister.”

Randolf Penning, Professor of forensic medicine, speaks calmly. In a career of 25 years, he has done over 10,000 autopsies. He has suddenly realised that there has been an increase in the cases of infants with cerebral oedema that he had never before seen.

“In 2002, we chanced to have during the space of 1 month, the opportunity to examine the bodies of numerous infants that had been recently vaccinated. We observed that the brain was very hard. For us this was a sign of death by asphyxia. Neither our institute, nor the police thought that this could be due to homicides. Nevertheless, the deaths were suspicious. Of 120 infants, 6 had died either the same day or the next one after vaccinations. This increase in the incidence alerted us. There are about 300 forensic pathologists in Germany and we all know each other. I have spoken to some of my colleagues who have also seen these cases. According to them, everything indicates a common link between the hexavalent vaccines and the deaths occurring on the same day or in the 48 hours following the vaccination.”

We made ourselves unpopular (inflamed!) with those tightly linked to vaccination. This involved the members of the permanent commission for vaccines (presumably = IMAC) and those people that cannot accept that we say anything about their vaccines. However, at no time have we implicated any vaccine. What we have pointed the finger at is the combination of certain vaccines. It is discouraging. You try to start a scientific discussion and you are met with hostility by the profession and seen as a trouble-maker or an idiot…”

A similar French text of this statement is here:

Penning and Zinka et al (1) published a series of six SIDS after Hexavac injection and reported various extrapolations suggesting a minimum 500% increase of cases in a country like Germany.  their calculation are credible, since the scientific discussion on Hevaxax published on the EMEA site when the product was registered mentioned 7 cases of SIDS among 3 905 infants included in the development studies, who were followed for safety during a 1-month period.

This corresponds to a 35-fold increase as compared to the expected number over a similar period. (2)

Their findings were poorly received by their colleagues.

Perhaps all the New Zealand forensic pathologists should be alerted to this phenomenon!

A piece of advice for New Zealand parents.  Investigate before you vaccinate.  Don’t rely on the talk of experts, those tightly linked to vaccination, to “make” your “choices” for you.  And if your child dies, with a diagnosis of cerebral oedema after any Hexavalent vaccine, ask yourself why it was you were never told that this might happen to your child.

The answer might be that anyone tightly linked to vaccination will be inflamed at such a suggestion.

What might happen if all the skeletons in the vaccination “top-secret” files burst out all over the floor?  How will you feel if the provaccine experts, try to persuade you that they had no idea what has happened in Europe in the last 6 years?

They will continue to say that you can trust Craven “A” .. oops, sorry… vaccines.


(2) Private correspondence with a French doctor.